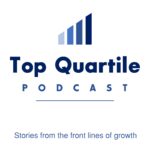 Janelle Herrera, the head of Marketing and Business Development at OnTap Credit Union talks with Dan Marks about OnTap’s unique mission tied to their roots and it focuses the growth strategy. Dive into the history at the bottom of the bottle on this fascinating Podcast episode of Top Quartile.

How to win awards and crush ROI goals w/Gentry Moyes

Gentry Moyes, Head of Paid Media at Mountain America Credit Union, goes behind the scenes with Dan Marks to unpack the who, what, and why of the MACCEE award winning campaign that Mountain America recently wrapped up that used influencers to authentically promote the, ‘My Style,’ checking product.

Credit, Digital Lending, and how to use data in new ways w/Jeff Keltner

Top Quartile
Credit, Digital Lending, and how to use data in new ways w/Jeff Keltner

Jeff Keltner joins Dan Marks in this episode of Top Quartile to discuss credit, digital lending, and how to use data in new ways to expand access to credit. Jeff is the Senior Vice President of Business Development at Upstart and has a Computer Systems Engineering Degree from Standford.

Sean Kouplen and Dan Marks discuss the culture of support and giving that Regent Bank has been thriving on both internally and externally, and how Sean has learned and developed his leadership strategy over the years as the Chairman and CEO at Regent Bank.

Ed Francis at InBank has a similar approach to leadership and generates similar results.  Check it out: